ProCalV5 allows for the addition of different “Test Types” to the database that may be applied to any item master record whose required calibration does not fit perfectly into the typical ProCal template.  Test types may be used to provide specific testing in addition to or instead of a standard calibration with target set points and as found/as left readings.  Examples of some calibration test types that ProCalV5 normally could not accommodate efficiently are extreme values, linearity and standard deviation tests.

To add a new test type to your database you must first copy the required library file “Linearity1.bpl” into the folder labeled “bin” under the ProCalV5 directory (typically “C:\Program Files\Prime Technologies\ProCal V5\bin”) in Windows Explorer.  The “Linearity1.bpl” file contains all the information necessary for the test type’s automatic and proper setup in ProCal.  Once the file has been copied into the correct folder you may launch the Set Up Test Type Packages screen.  Once the screen is open you may click the Add New Record button or select “New Record” from the screen’s File menu.  This will invoke a browser screen titled Choose New Package File that automatically directs you to the “bin” folder in which all the “.bpl” files reside. Select the required file “Linearity1.bpl” and click the Open button or double-click the file name.

Once the correct file has been selected you will be returned to the new test type record which will already be set up for you.  In this instance you can save the record, making it available for application to all types of item master records in the system (i.e. instruments, loops, systems, test instruments, in addition to any PM records that may require a calibration).  Once a test type has been saved to the database, as long as it is marked as “Active”, it will be available for selection on the Test Type field’s drop-down list on the Calibration Points tab in all screens where that tab exists.

Although you will have no ability to change the test type’s calibration requirements, you do have the ability to make some customizations to it in terms of field label changes and also giving users the ability to edit target set points and such when entering calibrations using that test type.

Test Types only need to be installed in the System Option and Defaults screen once, but for all Client, Administrator, or Mobile Workstations, the “Linearity1.bpl” file must be present in the “bin” directory one level down from the ProCalV5 installation directory.

Definitions for the Scales and Balances Test Type Package

Once the test type has been selected, the Test Point Group inputs will change according to the settings defined by the Linearity TTP library file, as shown in Figure 2:

The Additional Test Type Inputs used in this test are as follows:

NOTE: A device that has inherently high accuracy with respect to Linearity, such as an Analytical or a Micro Balance, will generate an R and R2 so close to 1.0 that this test may not provide usable data.  In this case a standard accuracy test can be specified with a ProCalV5 Test Point Group without the Linearity TTP utilizing a Linear Correlation between the As Found values and the Actual Input values that specify the straight line.

Once a Test Point Group has been created for a master item record that uses the Linearity Test Type, a calibration record can be created and data can be entered on the Test Results tab on the Calibration screen.  It should be noted that the required inputs must first be entered on the master item record as detailed above.  The Test Results tab for a Device Master Record utilizing the Linearity TTP is shown in figure 5: 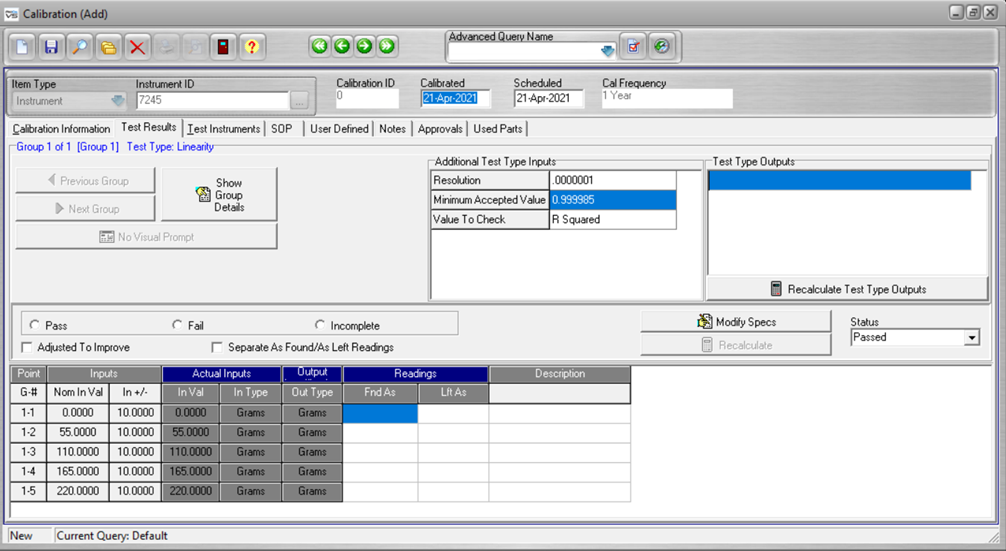 After making any necessary adjustments to the Actual Inputs, In Val entries to correspond to the actual Inputs used by clicking the Modify Specs button (see the ProCalV5 Main Application User Manual for a discussion of this functionality), the Technician will enter data for each Test Point in the Readings, Fnd As fields.  When all As Found data has been recorded or when ready, the Technician will click the Recalculate Test Type Outputs button and the Linearity TTP will display the calculated R and R2 values in the Test Type Outputs box as shown in figure 5 above.

The Linearity TTP will also display the Pass/Fail determination based upon the As Found values in the Test Type Outputs box by scrolling down in the box, as shown in figure 5a below.   Complete the Calibration Record as you would any standard ProCalV5 Calibration Record according to the Work Flow practices of your Organization. 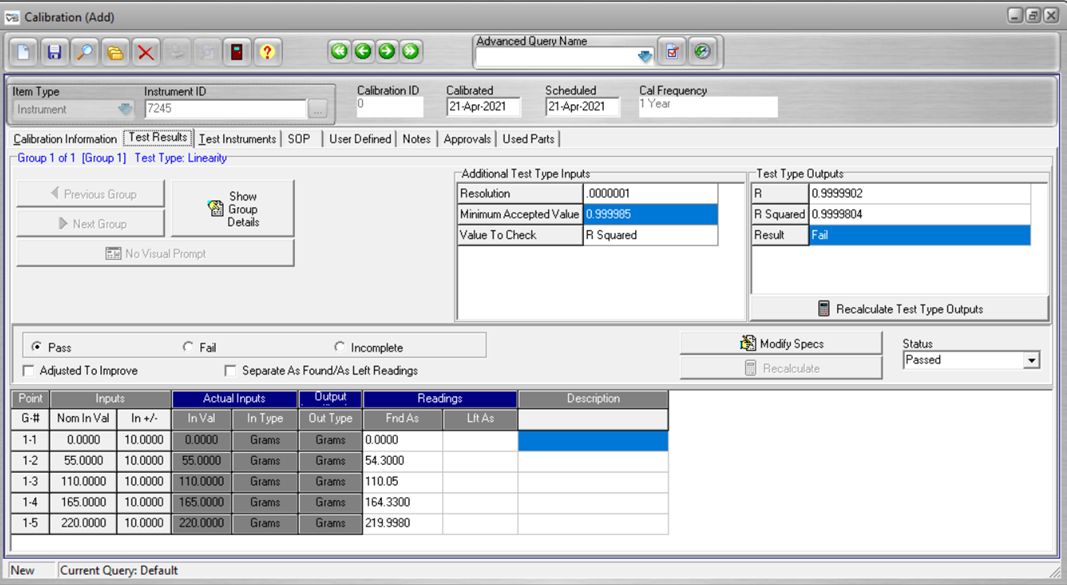 These values are generated by the ProCalV5 Linearity TTP using the As Found data collected on the Calibration screen.

All calculations are performed using As Found readings:

As Found Failure (Found out of Spec) – the “Found out of Spec” Calibration Pass/Fail logical condition is not determined and therefore not reported by the Linearity TTP.  The As Found test will by default always pass.

As Left Failure (Cal Failure) – the “Cal Failure” Calibration Pass/Fail logical condition is determined and reported by the Linearity TTP based on the As Found data collected as follows:

R
Robert is the author of this solution article.

Did you find it helpful? Yes No

Send feedback
Sorry we couldn't be helpful. Help us improve this article with your feedback.